Now you may remember the epic failure of meeting the Metropolitan Police Mounted Branch up on Epsom Downs. After that we did have another trip, but it was the morning we said goodbye to Bailey so it was a bit peculiar. A couple of weeks ago though I got to go back! Poor Mr Frog and Field had to go to work so he couldn’t join me, sad times. So on my larry I trundled up the m25 to the training centre in Surrey.

It’s very quirky place. Imber Court is nestled in a very affluent and leafy part of Surrey. You just don’t expect to see a yard mixed with a football ground but hey that what it is and it seems to work! Metropolitan Police Mounted Branch training and assessment is based at Imber Court, old buildings sit alongside a modern sports centre, and its where a lot of the training happens. Like I mentioned I was lucky enough to watch some indoor Cross country before Christmas but Sergeant Richards let me back to watch the activity ride.

A bit about the Activity Ride, you will have probably seen the activity ride at a county show or Olympia. If you haven’t then go and watch one-it is awesome. During the ride the horses slot in behind each other at speed, jump the same jump in opposite directions, remove their saddles whilst cantering and finally jump through hoops of fire. For someone that can just about canter without stirrups this is pretty inspiring stuff.

This group of horse and riders were a mixed bag. There was the dedicated ‘Pace Setter’ or baby-sitter, he is wearing the saddle cloth. An experienced horse with an experienced rider. By experienced I mean able to do the activity ride and has done it before. Then there was a mixture of newbies, both horses and riders. One horse was a 4-year-old called Scrumpy, not long off the mountains in Wales! This session was known as the Baby Tivy. As in the practice for the actual activity ride. So as you can tell there was potential for some errors. 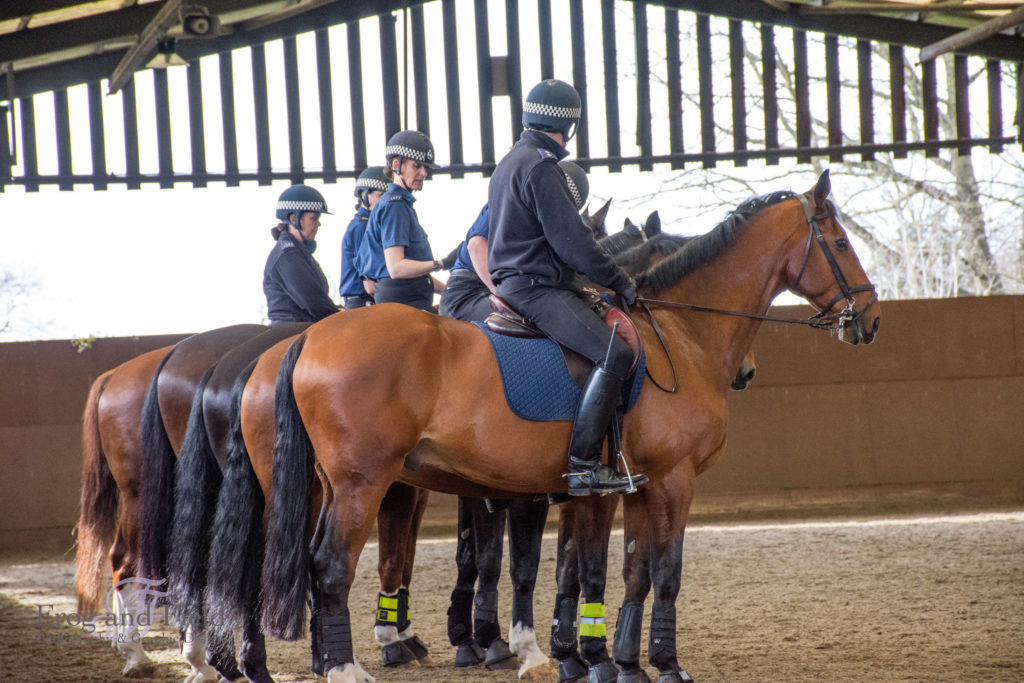 First of all, the ride just warmed up, standard walk, trot and canter. All about keeping a rhythm and being able to adjust their speed. Eventually they moved on to practising ‘cross over’. This starts by everyone cantering a circle and ensuring they are at the marker at correct time. They should also be opposite their pair during this and if not someone needs to slow down or hurry up. Then they split into two groups, in opposite directions. Then they came of a diagonal across the school. Each of them just slotted in the gap. Once this was established they moved onto ‘head to head’

This involves lines of hurdles being set up and the ride riding head to head. Initially a steady pace was set by the whole ride going over them as one. Second step was one group jumping down the line with a second group cantering up the line to the side. This was repeated with both groups until eventually the two groups were jumping in opposite directions. They pulled this off seamlessly. Both riders and horses taking it all within their stride. 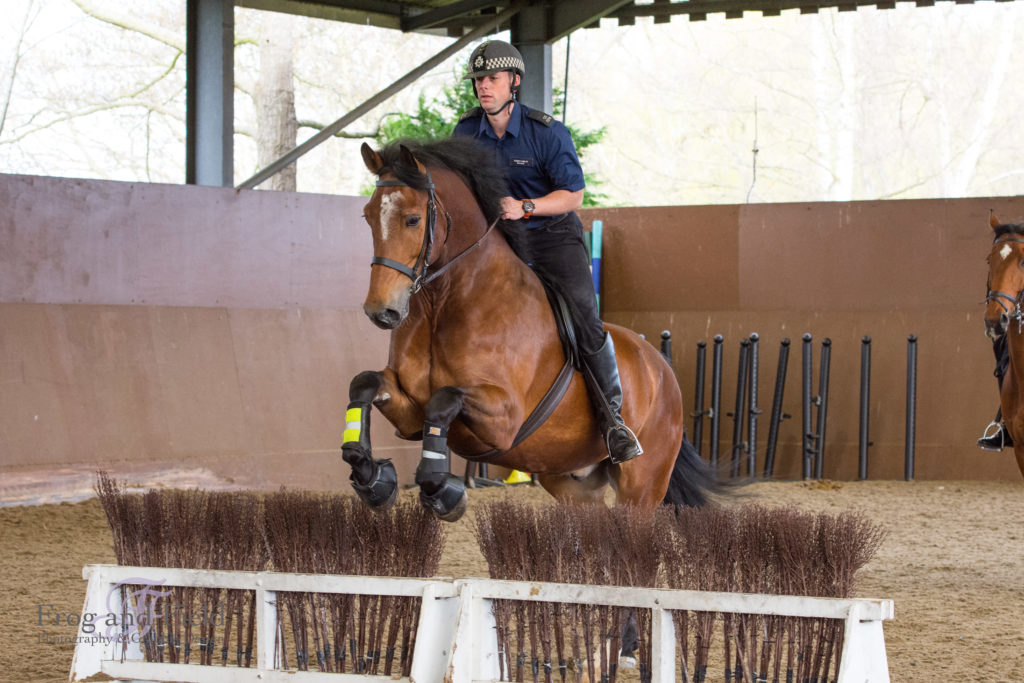 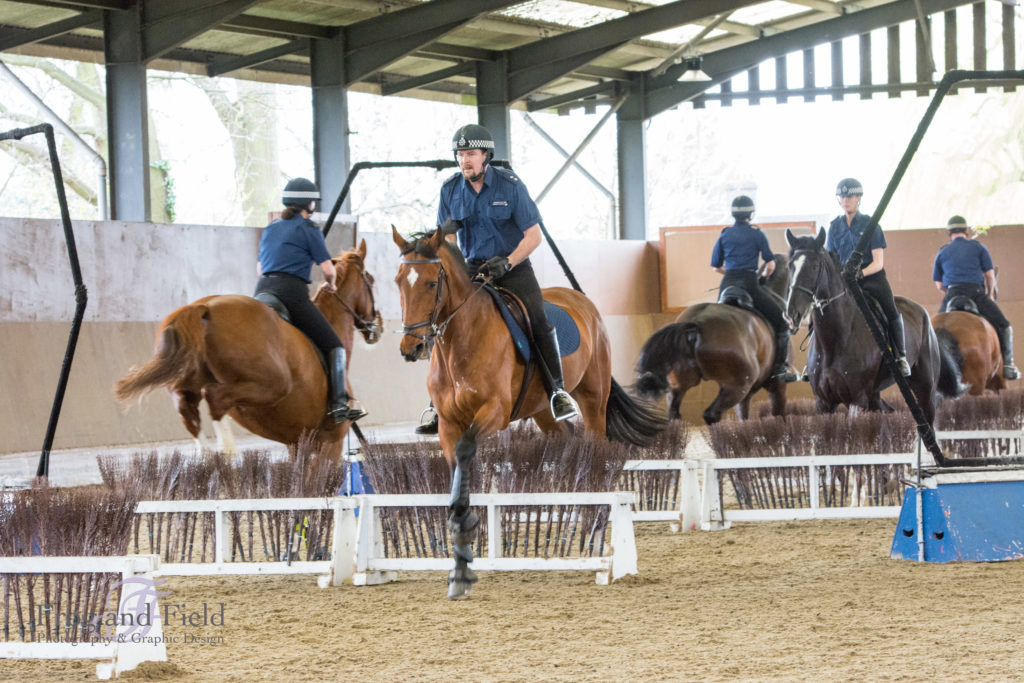 Next came the fire-woohoo. Obviously they don’t just dive in with the hoops fully lit. They all followed their lead over and through the metal hoops. All happily popped over them, in both directions and then in two groups. Then a small amount of fuel was added and lit. There are lot of people in the background with this, the ground team was brilliant. Having to grab me out of the way a couple of times in between setting everything up. With a small area burning the exercise was repeated. Again all popped through with only a couple of minor hesitations. Sergeant Richards then asked them to fuel them up well and light them. Then there were flames, flames that meant the riders definitely would tuck their elbows in. Again all horses got on with their jobs and skipped through! 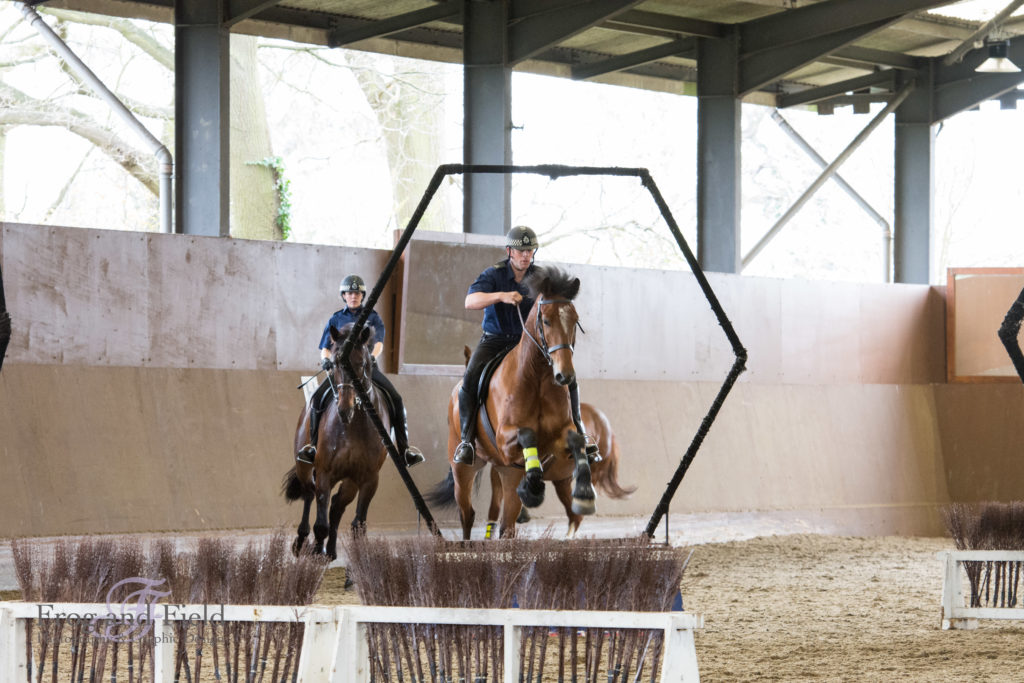 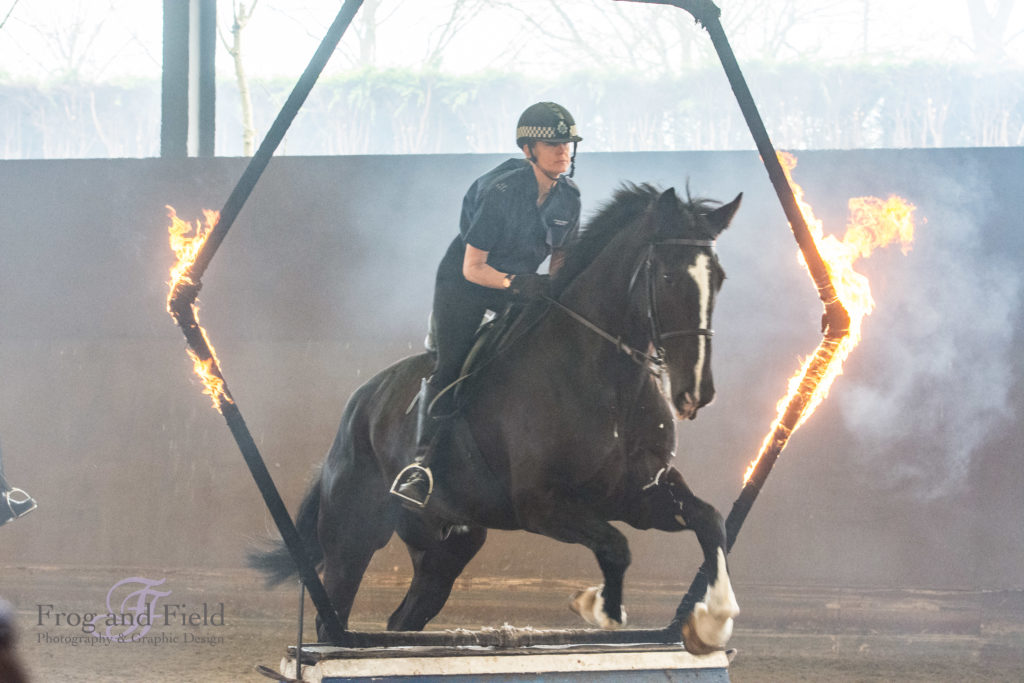 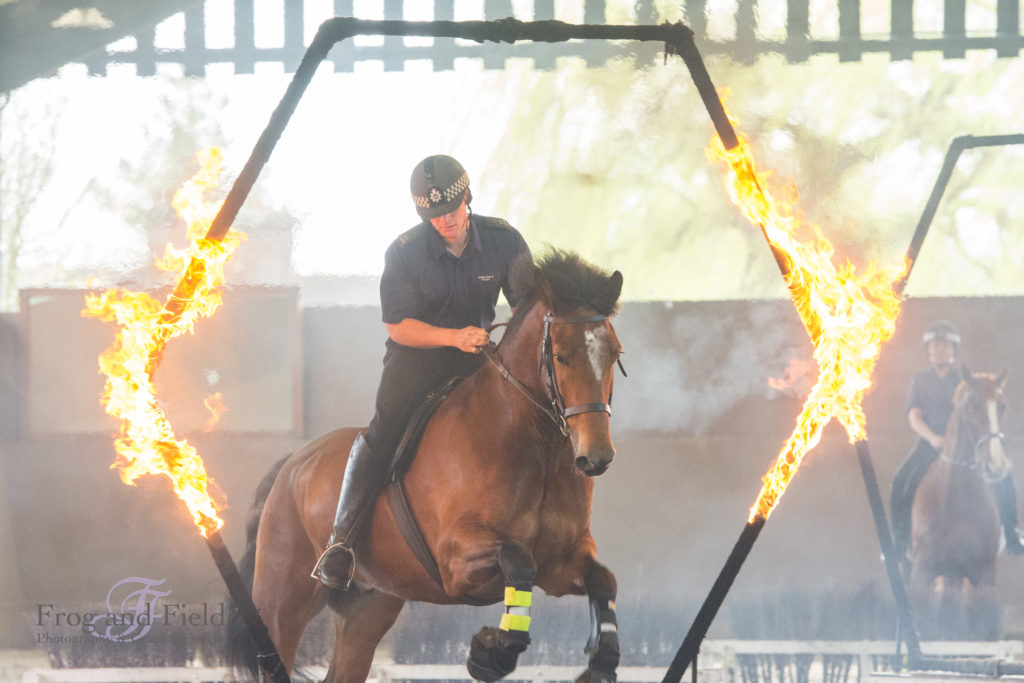 The final sequence of tricks is the removal of stirrups and the removal of the saddle. Whilst cantering around the arena in formation! Stirrups were fairly easy, unfortunately they do bash around the sides so a few of the horses got a wiggle on. One particularly sensitive chestnut got a bit of speed on, but he was very sympathetically ridden and soon back in line. Once stirrups were safely off they then went down the line of hurdles again. I was getting tired just watching them!

Last of all the saddles. No tricks or cheats here. Just good old fashioned balance and nerves of steel. Into canter one by one with their leader setting the pace and the girth was undone. Still in canter the rider leant forward and whipped of the saddle with one had whilst remaining mostly in control. For the horses who were a bit more settled the saddle could be raised up and then the hurdles jumped. Safe to say not everyone took Sergeant Richards up on the offer. Still a pretty impressive end to the morning. One by one the horses filed into formation and quietly stood in line for some pictures. 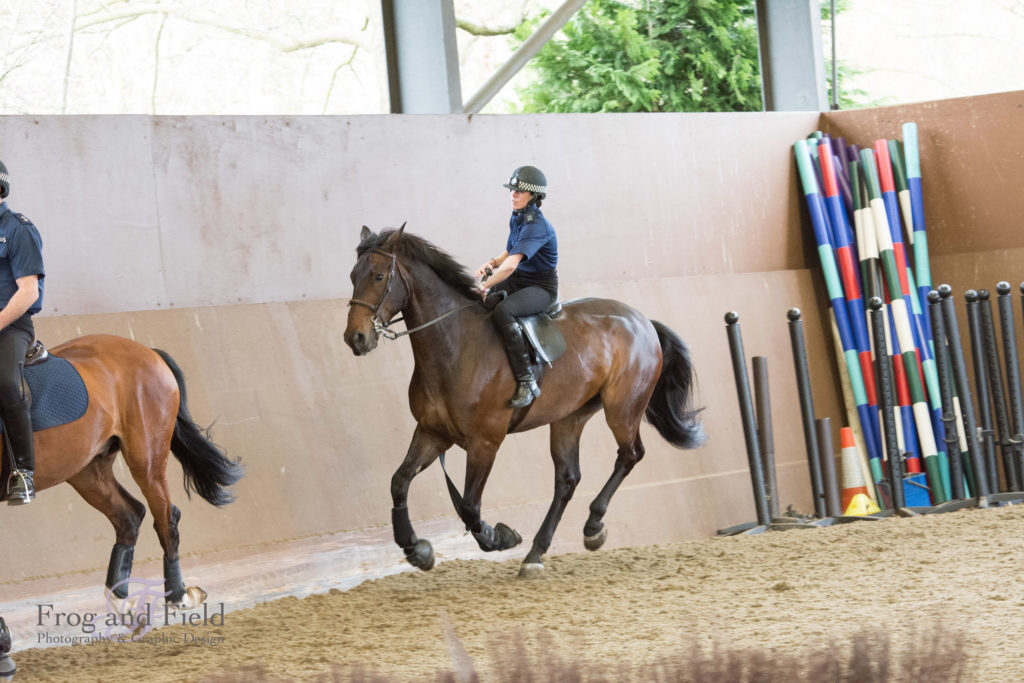 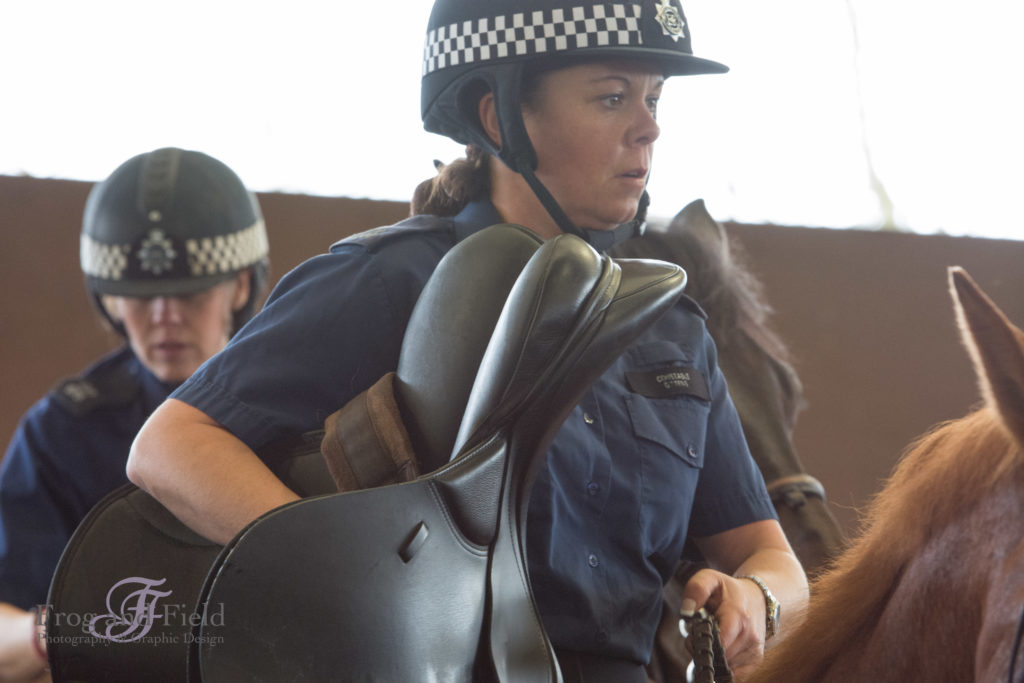 I absolutely love these horses and have the most respect for the riders, trainers and ground staff. Thank you again and can’t wait for next time 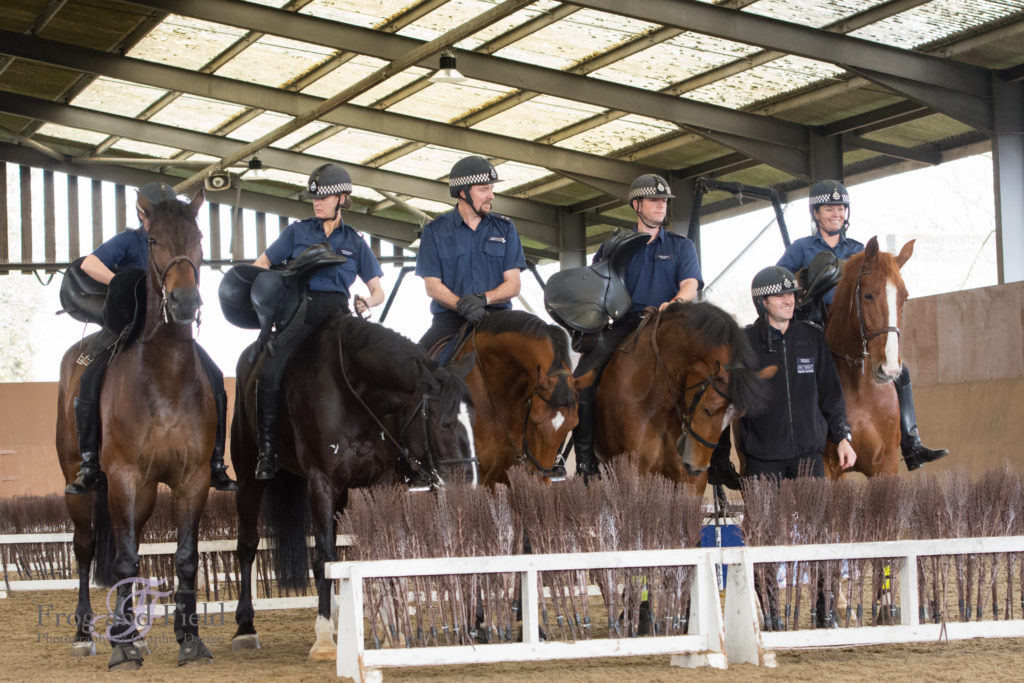