Ascot Racecourse Racing and Fireworks Display  is a yearly pilgrimage for the Thompson household. So as 2017 rolled around we were super excited to get our tickets booked up! The first dilemma of the event was what to wear. I have many ‘horsey’ coats but nothing smart. The recent house move had also robbed me of my smart coat so I was at loss.

Off into town I went but the hypothyroid battle had not been going well for me and everything was just a bit too tight. Fed up and feeling like a giant blob I sloped back home. I started looking at capes and tweed field jackets thinking they would look the part. The budget was limited though and nothing was affordable. I put a post out in the small business group I belong too and hoped someone would have a great idea. Maybe a discount code or something? Helena, of Charleston Couture came to my rescue and offered me a prototype to wear! I was so grateful.

A lovely bespoke tweed cape arrived for me. Fitted but not too fitted with a delicate fur trim. It had pockets- a must for me-and was beautifully made. I did a little twirl and was very impressed at the fat roll coverage. It was longer length too so the bum was suitably covered up and the tweed was just the right shade of brown.

A grey morning greeted us and we set off with a boot full of wellies and coats with a slightly deflated mood but hopeful that the sun would come out! After all I had my lovely new cape to wear and I didn’t want to ruin it in the rain. 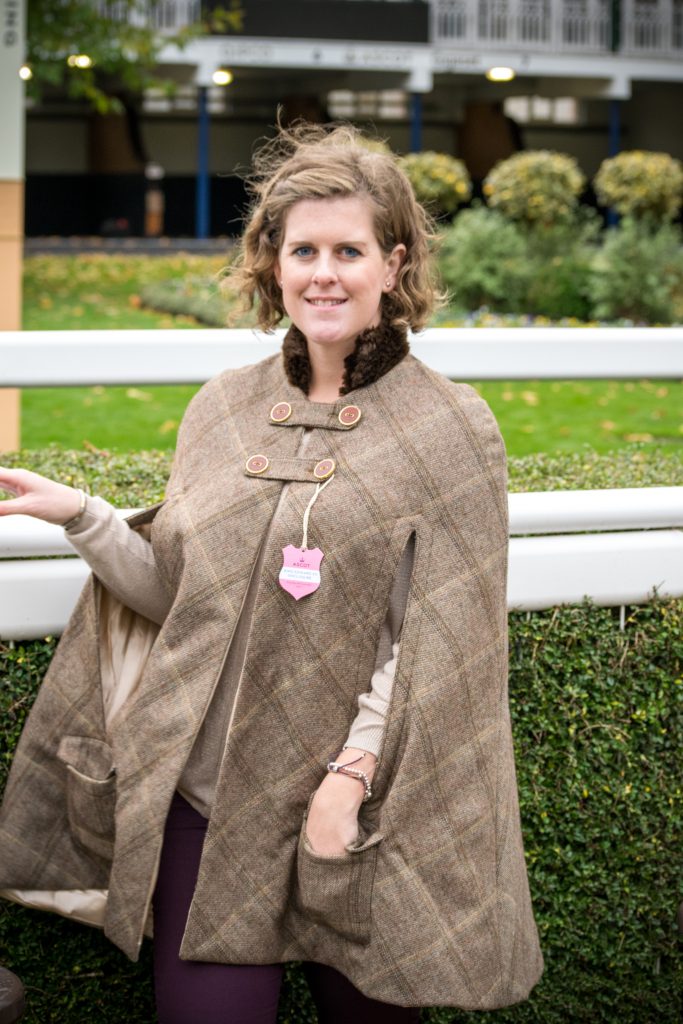 We got there in good time but because the weather looked a bit manky we took advantage of the ample and free parking. Sadly, this meant someone (me) had to not drink. Slightly gutted as you are allowed to take in one bottle per person. Then I was pulled out of the que asked to sign a disclaimer about photography and say I wouldn’t take any pictures on the track or the parade ring.

Firstly, the camera I took was not a professional camera. Secondly, I never intended to sell pictures but rather take some for the blog. I know the rules and regs about the photography and trust me in the low light the camera I had took would not have taken anything worth selling. I guess the people on the door didn’t know this but still it was a bit irritating.

Never mind we were here for the racing. Tara and I managed to find each other and the ‘drinkers’ proceeded to work their through the large bottles of prosecco. I’ve said it before but one of the great things about the photography is the people I’ve met and the friends I have made. Tara is one of those people. Her and Simon are just lovely and we share very similar likes/dislikes. We love nice food, gin and horses. A perfect combination and hopefully a friendship that will last, if I don’t keep stealing her hat!

Ah yes, the hat. The Mackenzie and George Fedora just finished my outfit off beautifully. Plus, it was perfect for the slightly damp air that had made me resemble a demented poodle. A fedora in wool with a lovely feather detail is what I needed.  It’s gone straight on the Christmas list and hopefully Mr Frog and Field will be online shopping for it. 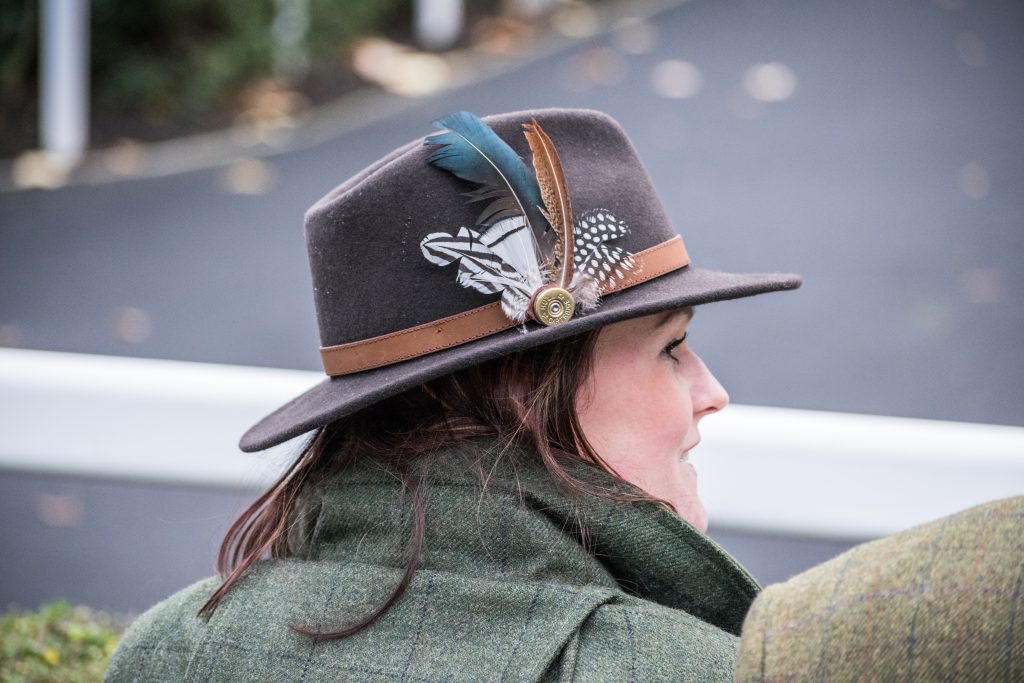 I had the luck with the betting and Brown Bear winning meant I was a couple of pounds up when I finished. I never bet big money. Just £10 which once it’s gone its gone. There is no secret to my betting- I just go with names and gut feeling. We had all started to get cold by the fifth race and could feel our tummies rumbling. There was a 2.5-hour gap between the fireworks and the racing. Honestly, I don’t remember it being so long previous years. In light of the need for warmth we headed to the Belvedere Arms just up the road. I had a fab meal of battered Halloumi and sweet potato fries and judging from the silence around the table it was safe to say everyone liked their food! 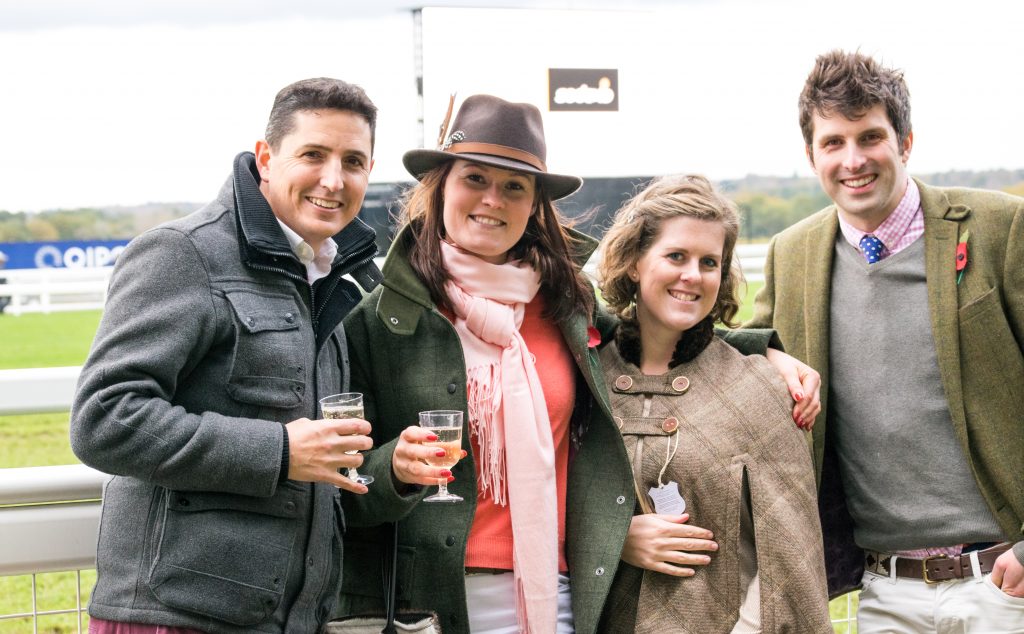 Back in the car and it was firework time. Actually, it was sit in the car and que for 30 minutes simply to re-park time. Epic fail on our part and again my mood was being hammered. It was cold, I was sober and I was so bored in the car. Finally, we got there and rushed through all the fairground rides. It is worth saying the Ascot do family days very well. There were loads of rides (all free in the day) pony rides, face painting and lots to see and do.

However, the crowds slightly took the fun out of the day for me. It needed to be a tiny bit warmer, a little less busy and I needed a lot more bubbles. We went to toast some Marshmallows on the fire but the stall had run out of marshmallows so we went to get a spot to watch the show.

Again, the popularity is great for the racecourse and the round table but it did make it less fun for me. We eventually found a tiny spot where we could see the fireworks without snuggling up to some strangers and eagerly waited. Now previous years there has been a theme to the music and the fireworks have been awesome. This year wasn’t quite the same. The fireworks were shorter and the music random. They were still very good but we’ve been coming for a number of years and I was underwhelmed this year. Such a shame but as anyone who knows me will say I am honest. To the point of being blunt. So, whilst it’s a great family day out and a good firework display I’m undecided about attending Ascot Racecourse Racing and Fireworks Display next year….. lets wait and see what the weather does! 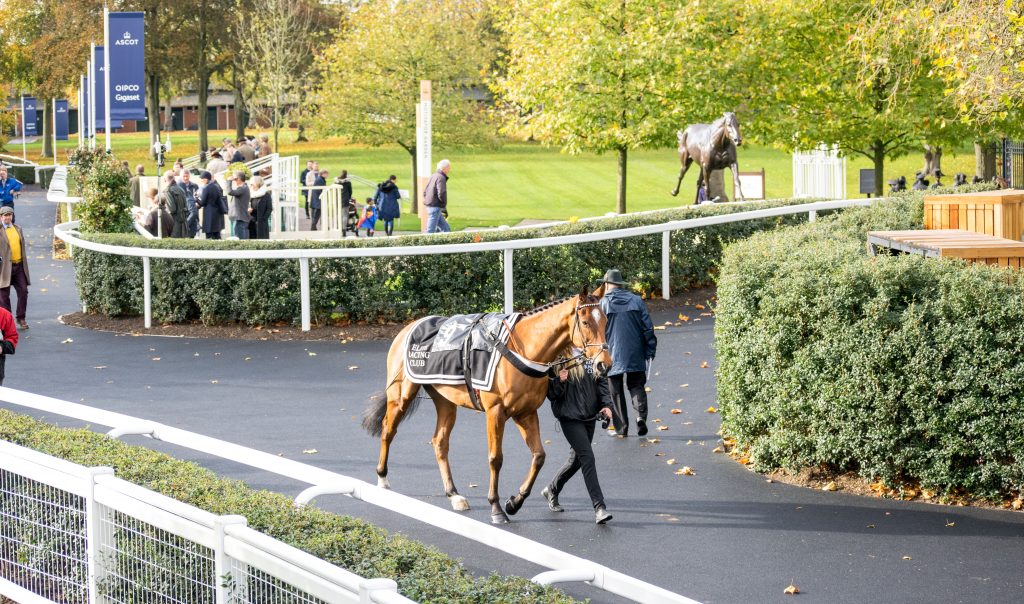